Please note: You will need the core game “Colt Express” in order to use this expansion.

It’s time to jump back on board the train and loot the passengers once more—the Marshal & Prisoners expansion is coming soon for Ludonaute’s Spiel des Jahres-winning board game, Colt Express!

The Union Pacific Express is still loaded with sacks of money and priceless jewels, but your banditry is about to become more dangerous than ever before! Marshal Samuel Ford is fully armed and ready to shoot down any villains who dare attack his train, and a few of your trusty sidekicks have been taken prisoner in the train’s prison car. Freeing them may bring you significant rewards—but is it worth trying to slip past the marshal’s watchful gaze?

For the first time in Colt Express, the Marshal & Prisoners expansion gives one of the players the chance to take on the role of the marshal himself, unlocking an entirely new way to play the game. You’ll also find a prison car to attach to your train as the perfect place to incarcerate lawbreakers or earn some more money by freeing the prisoners already trapped there. Finally, you receive an entirely new character—Mei, the martial artist—and thirteen new Round cards to make every game of Colt Express a completely unique experience!

The bandits of Colt Express have always competed against each other for the loot, but they still share a love of money and a disregard for the law. Now, with the Marshal & Prisoners expansion, one player can take a completely different view and directly oppose the bandits by playing as the marshal protecting the train. Of course, the marshal isn’t trying to loot the train—he wants to safeguard the mail it carries and the passengers on board. Although the marshal has decks of Bullet cards and Action cards just like the bandits, his objectives are very different—determined by a random deck of goals that forces the marshal to play differently in each and every game. 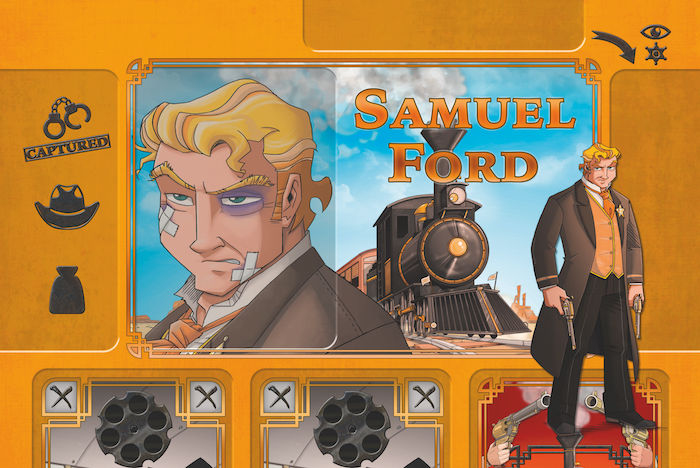 As the marshal, your goals may force you to stay out of the way of the bandits’ bullets or make sure you’ve emptied one of your own guns. You might spread your bullets around and give every bandit a taste of lead, or you might focus on capturing the bandits shown on your arrest warrants. No matter your goals, you’ll need to work hard to accomplish them. If the marshal has completed at least four goals before the end of the game, he wins the game alone! With a marshal player in the game, the richest bandit only wins if the marshal fails to complete his missions.

When one of your players is controlling the marshal, you’ll immediately experience a newfound camaraderie between the bandits. After all, if the marshal can complete his goals, none of the bandits even have a chance to win! Yet there are always reasons to betray each other and sacrifice a fellow bandit to justice—if you haven’t been captured by the end of the game, you get an extra $500 towards your total score. You can also gain renown from going toe-to-toe with the marshal in a fistfight as well. The first three bandits to punch the marshal all receive a cash reward—but you’ll need to get awfully close to the marshal’s bullets if you’re going to start a brawl. We’ll take a closer look at the marshal and his special abilities in a future preview of the Marshal & Prisoners expansion!

The marshal must complete four of his goals to win the game!

I Hear the Train A-Coming

The marshal has two fully loaded revolvers that he’s more than willing to empty into the bandits, but bullets aren’t the marshal’s only tools. A prison car has recently been added to the train, complete with a cell that the marshal can use to imprison bandits. The prison car is always attached to the end of the train, opposite the locomotive, and if your marshal reveals a Capture Action card, he can choose a bandit in his space and put that player in the prison car’s cell. Then, if the marshal had an arrest warrant for that character, he completes the goal and moves one step closer to victory.

If you’re the unlucky bandit now imprisoned within the cell, there’s still a way for you to get out. With this expansion, each bandit receives a new Action card: Brilliant Idea. You can use this card to copy the last Action card played, but you can also use it to escape from the prison cell and get back to your important work of looting the train passengers. What’s more, you can choose to search for Brilliant Idea during the Schemin’ phase instead of drawing as normal, ensuring you always can pick the lock and escape the prison cell when you need to. 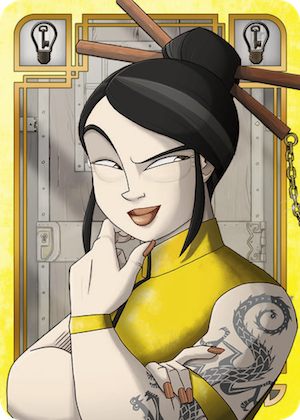 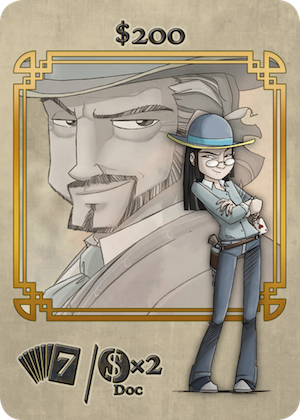 With a Brilliant Idea card like the one on the left, you may be able to free a prisoner card belonging to another bandit, giving you their power!

Bandits aren’t the only ones locked up in the prison car, however. You’ll also find a variety of Prisoner cards placed behind the prison car at the beginning of the game. Each of these prisoners corresponds to a single bandit, and if you rescue a prisoner, you gain that bandit’s power in addition to your own. Of course, you can also liberate your own sidekick, in which case, you can gather loot much more quickly, helping you accelerate to victory!

You and your fellow bandits are on the cusp of pulling off the heist of a century. All you need to do is get past one marshal. Take up the marshal’s badge and defend your train, or liberate your sidekick from the prison car and start robbing the passengers! No matter which side you play, you’ll find plenty to enjoy in the new Marshal & Prisoners expansion for Colt Express.