Rebel Troopers fight across the galaxy, but the troopers stationed at Echo Base were specially trained to deal with the extreme environment that awaited them there. This specialized training can make the difference between victory and defeat in a game of Imperial Assault.

This figure pack invites you to unleash the uncompromising resilience of the Echo Base Troopers on any battlefield. Two sculpted plastic figures bring the characters to life and replace the tokens found in the Return to Hoth expansion. With a new campaign side mission, two new skirmish missions, and new Command cards and Deployment cards for both games, the Echo Base Troopers Ally Pack can help you hold the line against any Imperial forces. 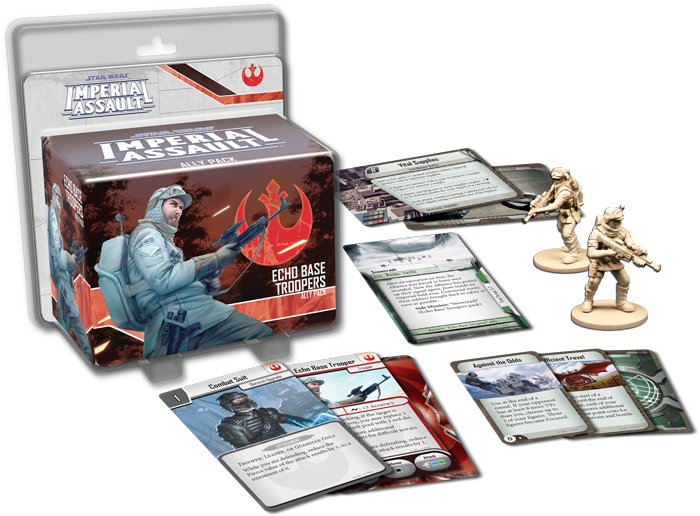 Rebel Troopers fight across the galaxy, but those stationed at Echo Base were specially trained to deal with the extreme environment that awaited them there. The specialized training given to Echo Base Troopers can make the difference between victory and defeat in a game of Imperial Assault and the Echo Base Troopers Ally Pack invites you to fight for the Rebellion with these heroic warriors.

The Echo Base Troopers offer several advantages to the commander who employs them wisely. When Echo Base Troopers take their place on the front line, you can dramatically improve their firepower by swapping a blue attack die for a red attack die. In addition, Echo Base Troopers are trained to traverse the dangerous ice fields of Hoth, and their Efficient Travel ability allows them to ignore the effects of difficult terrain on the battlefield.

You may have cause to call upon the Echo Base Troopers in your campaigns or skirmishes with the new missions introduced in this figure pack. A new campaign side mission forces you to escape from a collapsing Rebel base, while two new skirmish missions bring your competitive battles to a Hoth Weather Shelter. With several new Command cards to change your skirmish game tactics, this Ally Pack brings the Echo Base Troopers to the forefront of your Imperial Assault battles.