FREE SHIPPING TO THE UK

The battles of Star Wars: Legion can rage across the galaxy. You may be fighting in the desert wastes of Tatooine, the snow fields of Hoth, the grassy fields of Lothal, or the tropical beaches of Scarif. No matter where the Galactic Civil War takes you, the Priority Supplies Battlefield Expansion has the miniatures to bring new life to your battlefields.

Your troops may hunker down behind sturdy barricades or desperately maneuver to secure crates, comms stations, and moisture vaporators. With a total of twelve objective miniatures between these two expansions, you’ll have everything you need to bring a new level of Star Wars realism to your games of Star Wars: Legion. 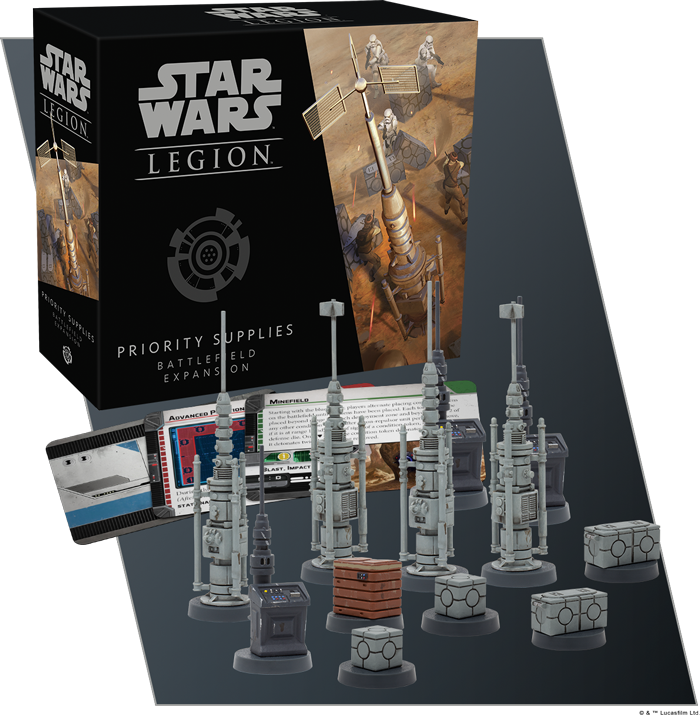 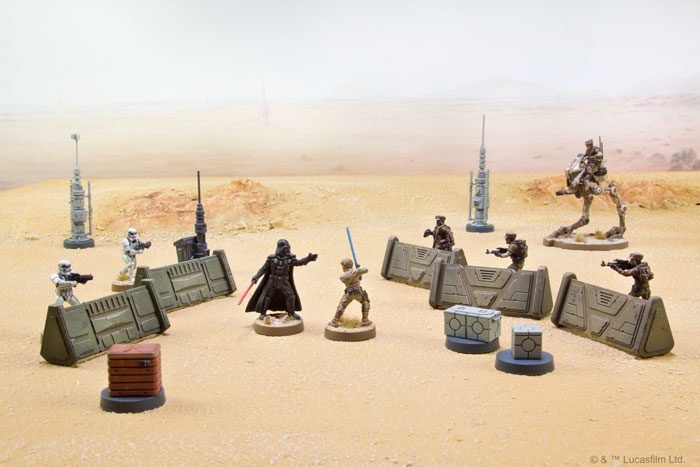 Rather than a flat piece of punchboard, the objective miniatures included in the Priority Supplies Battlefield Expansion spring off of the battlefield, providing a clearly visible and thematic place for you to direct your army. Within this expansion, you’ll find three comms stations, four moisture vaporators, and five supply crates, each giving you the perfect way to mark an objective token on the battlefield, no matter which objective card you’re using. And of course, even if you’re not marking objective tokens, each of the miniatures in this expansion can stand in as terrain, bringing an added layer of Star Wars theme to your games of Star Wars: Legion.

You’ll also find new variety for your conflicts in the three brand-new battle cards included in the Priority Supplies Battlefield Expansion. Sabotage the Moisture Vaporators puts the new moisture vaporator miniatures to good work—one player is tasked with repairing the four moisture vaporators scattered across the field, while the other player must attempt to sabotage them. A new deployment card, Advanced Positions, puts both armies in opposite corners of the battlefield and allows them to adapt and move, scouting in advance to gain the upper hand. Finally, theMinefield condition card transforms any battleground into a lethal deathtrap, sprinkling mines around the battlefield. Whenever a unit gets too close, they run the risk of setting off a detonation that could shatter even the toughest defenses.

Between twelve new objective miniatures and three new battle cards, the Priority Supplies Battlefield Expansion promises to reshape your games of Star Wars: Legion and draw you into the Galactic Civil War like never before.