DUE TO THE SIZE AND WEIGHT OF THESE WE CANNOT OFFER FREE SHIPPING I AM AFRAID AND SHIPPING OUTSIDE THE EU WILL BE AN ADDITIONAL £10.

“Engage the enemy in dramatic, high-speed dogfights while one of the galaxy’s most memorable battles unfolds beneath you! For use with X-Wing™ and Star Wars™: Armada, the 36” x 36” Battle of Hoth Game Mat features imagery of the Galactic Empire’s march on Echo Base atop a no-slip rubber base. The ion cannon, shield generators, and trenches – they’re all there. You’ll almost hear the rumbling of the AT-ATs as they march forward. All you need to add are your ships!

The Battle of Hoth Game Mat

“Com-Scan has detected an energy field protecting an area around the sixth planet of the Hoth system. The field is strong enough to deflect any bombardment.”
–General Veers

The ice planet Hoth saw one of the greatest battles in the Galactic Civil War as the Empire discovered the Rebellion’s hidden base, marched across the ice and snow, punched through the base’s shields, and eliminated it. Were it not for some quick thinking and individual heroics, the Battle of Hoth might have even seen the end of the Rebellion itself. 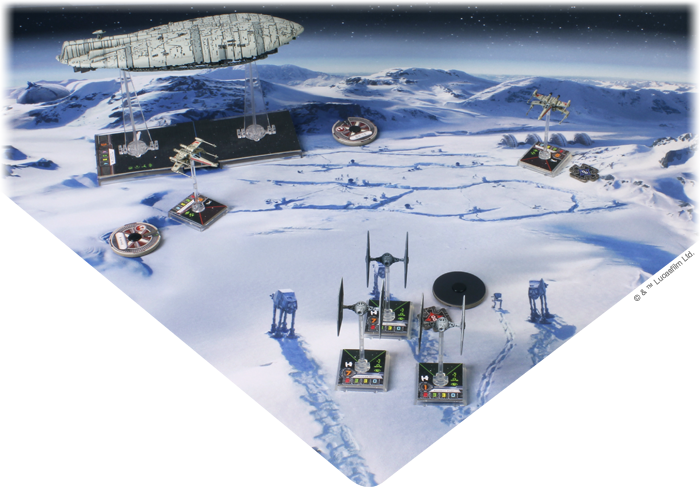 With the way it depicts the Empire’s trio of AT-AT Walkers marching up Echo Base’s shield generators, the Battle of Hoth game mat may leave you shivering with anticipation. Or it may leave you shivering with a sudden chill as you see how the ice planet’s thin atmosphere trails off into space. Either way, the Battle of Hoth makes a perfect backdrop for your X-Wing fighter battles, allowing you to imagine them as part of one of the Star Wars universe’s most pivotal battles.

The ion cannon, shield generators, and trenches—they’re all there. You’ll almost hear the rumbling of the AT-ATs as they march forward. All you need to add are your ships!

Awards for the game: